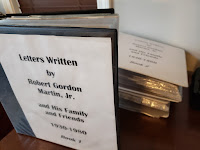 “Being confident of this, that he who began a good work in you

will carry it on to completion until the day of Christ.”

My new transcription project has been simmering for the better part of this past century. I recently brought it to life and turned up the heat.

After my father’s death in 2003 I was gifted the letters he had written to his family over a span of fifty years. My daughter, Libby, and I labored one weekend to put hundreds of documents in chronological order in large, oversized notebooks.

My personal project is to key the documents into a computer file as written. After the original file is saved for posterity, I will copy it and fill in the time spans with truth and fiction, creating a memoir.

The first letter is dated May 22, 1936, when Daddy was fourteen years old. He told his mother and father, who were on vacation, that he had fun fishing with his friends. I never saw Daddy hold a fishing pole. In fact, he rarely ate fish, although raised on Florida’s Gulf Coast!

I knew my father served in World War II as a paratrooper behind enemy lines. He rarely spoke about it, but colorful details are hidden in his letters. When we put the notebooks together, Libby and I discovered words deftly cut out of the pages as a military security measure.

My heavenly Father has called me to exhibit my earthly father’s faith so others will be encouraged in theirs. I am excited to raise Daddy’s strong faith in God to life in his letters and trust God to bring this amazing project, this labor of love, to fruition.

I will follow Jesus on this and all paths He lays out for me. I hope you will, too!