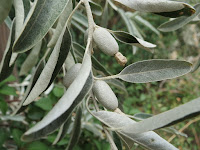 “But while everyone was sleeping, his enemy came

and sowed weeds among the wheat, and went away.”

While camping recently at High Falls State Park in Georgia, my husband and I hiked the Tranquility Trail. For Jeff, it was anything but tranquil. Around every bend in the path he pointed out invasive plants. “Elaeagnus is everywhere,” he noted. Later that afternoon he reported his findings to the park office and met with a grounds employee to discuss. Jeff does not take his calling as Master Gardener lightly.

In Sarah Coffey’s article “Elaeagnus: A “Dirty Dozen” Plant,” she offers that this invasive species was brought from Asia to America in 1830 for wildlife fodder, erosion control, and hedges. It forms dense thickets and shades out the struggling native plants below. Elaeagnus plants must be regularly eradicated or they will take over and destroy our native species. Seed dispersal by birds scatter the destructive plants. In the winter months it is most often the only green plant in the forest, which makes discovery easier.

When the Lord led His children into the Promised Land, they were told to exterminate the peoples there. In this case, the Israelites were the invaders, commissioned to purify the land. God’s kingdom must be pure in order to worship Him in holiness.

Elaeagnus plants (silverberry or oleaster) appear docile to the untrained eye. I discovered they were surprisingly considered the ‘plant of the month’ at a local nursery! The charge is to keep them under control. It reminds me of the difficulty of keeping the tongue under the Spirit’s control. How can I control my thoughts before they slip into harmful words? By staying in God’s Word.

I will work to remove all intrusive thoughts from my mind and destructive words from my mouth. I hope you will, too!