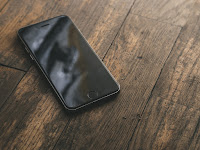 “Listen, my sons, to a father’s instruction;

My four-year-old cell phone was fine, but my husband was having problems with his. “God,” I prayed, “Please let me know when it is your will to replace our phones.” Not long after that prayer Jeff announced he was ready to release his cell phone to the trade-in pile.

Bobby met us at the door of the AT&T store. He was a tall young man, with beautiful, dark curls spilling over his eyes. We explained our dilemma. He was a tremendous help, deftly scrolling page after page of our account on his computer tablet. We were up and running with new smartphones in record time, impressed with Bobby’s skill and easy interaction.

God’s timing was perfect! We were able to get amazing, free upgrades on basically the same phones. I could have jumped the gun, ordered new phones and tried to set them up myself at home. But we wouldn’t have met Bobby, and he wouldn’t have a job to help “needy” people like us. God told me to stop, look, and listen up! His plans are always better than mine.

I asked Bobby what was the most number of phones he had set up at one time. He said, “Twelve - for exchange students that came to the University of Georgia. A bus delivered them to the store to get new phones for their temporary stay.” Bobby impatiently watched the Asian students struggle to select their perfect phone numbers. He told me, “Numbers mean something very significant to Chinese and Koreans, so I have to step in and assign their numbers for them.”

I will listen up when my heavenly Father guides me to get up and do what is best for His kingdom in His perfect time. I hope you will, too!