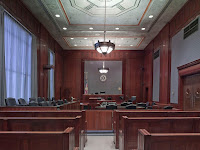 “Everyone must submit himself to the governing authorities,

for there is no authority except that which God has established.”

I received the dreaded jury summons in the mail and dutifully appeared with eighty neighbors one Monday afternoon in a concert hall. With Gary Sinise’s book, Grateful American in hand, I read about the terrorist attacks of September 11, 2001 as I watched struggle and animosity brew before my eyes. Where was God in all of our messes?

Two very different trials required separate jury selections. The pool of potential jurors sat calmly, or so it appeared, and politely distanced from each other with masks on. Only court officers were mask-less. No one looked at their phones. I wanted to walk out, get away from the negativity. But God told me to sit still and wait on Him. He would work it all out.

Attorneys questioned groups of potential jurors. During one of the breaks an elderly gentleman in front of me turned around and commented, “I’m having a hard time making sense of the first act of this play!”

My name was called and I took one of the juror seats. The judge asked that we introduce ourselves, then asked us several questions. One question prompted me to raise my hand. I was a policy-holder for the insurance company who was a party for the defense. That fact promptly excused me by the judge and all attorneys from the proceedings.

As I drove home that evening, God nudged me to pray for everyone involved in those trials. He knew what was going on and He was in control, even though it seemed unlikely. There is more pain in my community than I surmised a few hours earlier.

I lift up to my heavenly Father those who serve in our local judicial system. I hope you will, too!