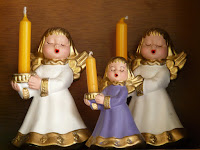 “An angel of the Lord appeared to them,

and the glory of the Lord shone around them, and they were terrified.”

It was late afternoon on December 16, 2003. I leaned close to my father’s face as he rested in his bed at Haven of Our Lady of Peace in Pensacola, Florida. He suffered sixteen long years with Alzheimer’s disease. The first ten years he lived at home with Mom as his caretaker. When she could no longer care for him, Daddy was placed in a nursing home. After several relocations, this was his final resting place.

The Haven was decorated for Christmas and carols were piped through the facility, but I was giving Daddy a solo concert of all the Christmas hymns and carols I could recall. When you sing songs in church for decades, you remember most of them, as I did.

Although my father had drifted mentally far from us many years before, I could always bring him back to me with a simple question: “Daddy, do you want to go play golf?” At my words, he would turn and look at me with bright blue eyes shining as he formed the one word, “Yes!”

My father was off life-support. I suggested my sister go home and get some rest - I would stay the night with Daddy. Little did I know I would watch him take his last breath that afternoon. It happened immediately after I finished singing, “Hark! The Herald Angels Sing.” He was ushered into heaven to hear the angels rejoice at his arrival. I am so thankful that my heavenly Father allowed me to be with my father when he was carried home on angels’ wings.

I will remember those who have gone before us and eternally worship with the angels. I hope you will, too!